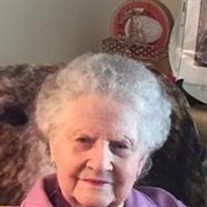 Mary B Thompson, 90 years of age of Weatherly, Pennsylvania passed away peacefully on Wednesday, December 20, 2017, at Weatherwood Nurisng & Rehabilitation Ctr. in Weatherly, Pennsylvania.  Widow of Eugene Paul Thompson she is survived by; daughter, Beth T. Rowe wife of Daniel of Drums; son, Stephen M. Thompson of Weatherly; grandchildren, Bobby and Matt.  A 1945 graduate of Weatherly High School, Mary had worked at Weatherwood Nursing Homeas activities director for a number of years. Upon the passing of her husband, Mary operated their family business Thompson's Upholstering & Awnings of Hazleton for a number of years, with the help of her family.  A member of the Weatherly High School Alumni Assoc., Mary was the author of two children's books. She was a accomplished painter, who volunteered with the Girsl Scouts to teach art. She enjoyed photography, and used her hobby while working for White Water Rafting in retirement.  Born Thursday, August 11, 1927 in Weatherly, the daughter of the late Elmer, and Ellen Amelia Brown. She was also predeceased by; sister, Pauline Maggio; brothers, Charles, Howard, and Robert Brown.  Funeral arrangements have been entrusted to the Philiip J. Jeffries Funeral Home & Creamtion services, Inc. of 211 First Street Weatherly, Pennsylvania 18255. (570) 427-4231  Funeral Services will be held on Friday December 22, 2017 at 11 o'clock AM from the fuenral home. Friends may call the morning of services from 9:30 A.M. until time of services.  Interment will be in Union Cemetery Weatherly, Pennsylvania  Memorials in her name to: Charles M. Schwab School Restoration Project P.O. Box 150 Weatherly, Pennsylvania 18255  Online condolences may be made to the family at www.griffithsfuneralhomes.com

The family of Mary created this Life Tributes page to make it easy to share your memories.

Mary B Thompson, 90 years of age of Weatherly, Pennsylvania passed...

Send flowers to the family.