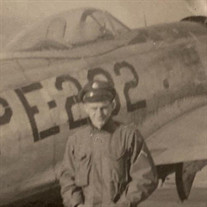 William (Bill) Vincent Vavro 94, a lifetime resident of Coaldale passed on to our Lord on July 16, 2021. After graduating from St. Mary’s High School and brief time working in the coal mines, Bill began serving in the military. Bill initially served in the Army Air Force at the end of World War II where he was a Polish / German interpreter with the Occupation Army in Germany. After his service he returned home to Coaldale where he again worked in the coal mines. Years later Bill re-enlisted into the Air Force where he served as a hydraulic technician servicing our country’s aircraft. His service had him deployed at several bases in the United States as well as in the Middle East (Turkey) and the Far East (Vietnam and Thailand). Bill received many awards and decorations during his service to our Country, He retired from McGuire Air Force Base in New Jersey. Bill was a member of the National Rifle Association and Lifetime member of the American Legion, VFW, West Penn Rod and Gun Club and the Ontelaunee Rod and Gun Club. Bill was a member of St John XXIII in Tamaqua and a former member of the now closed St. Cyril & Methodius Church in Coaldale. Bill was predeceased by his longtime companion Joanne Gatens, his parents Paul and Mary Vavro (Orsulak) and his brother Father Peter Paul Vavro MSC. He is survived by sisters Anne Stone (Bernard) of Syosset, NY and Bernadine Collins (Herbert) of Ocean City, NJ, nieces Candace Faunce (Jim) of Hamilton Square, NJ, Patricia Zielinski (Tom) of York, PA and Dr. Susie Blank (Ben) of Moorsetown, NJ, nephews Bernard Stone of Syosset, NY and Stephen Stone (Rosemarie) of Franklin Lakes, NJ. He is also survived by 15 great nieces and nephews and 2 great great nieces. Services will be held on Saturday July 24, 2021. Visitation will be held from 9:00 A.M. to 10:30 A.M. at the Social Hall of St. John XXIII Roman Catholic Church on 307 Pine Street in Tamaqua PA. A Mass of Christian Burial will follow at 11 o'clock A.M.. Interment with military honors bestowed will be a St. Cyril & Methodius Roman Catholic Cemetery in Nesquehoning PA. In lieu of flowers, the family asks that you make a donation to the Missionaries of the Sacred Heart Villa, 3300 Station Avenue Center Valley PA 18034. Funeral arrangements have been entrusted to the E. Franklin Griffiths Funeral Home & Cremation Services, Inc. 655 East Broad Street Tamaqua, Pennsylvania 18252. (570) 668-2550 Online expressions of sympathy can be made by visiting www.griffithsfuneralhomes.com

William (Bill) Vincent Vavro 94, a lifetime resident of Coaldale passed on to our Lord on July 16, 2021. After graduating from St. Mary&#8217;s High School and brief time working in the coal mines, Bill began serving in the military. Bill initially... View Obituary & Service Information

The family of William V Vavro created this Life Tributes page to make it easy to share your memories.

Send flowers to the Vavro family.