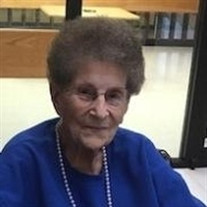 Valeria E. Funk, 96 years of age a longtime Weatherly, and Albrightsville resident passed away peacefully on Sunday, December 3, 2017, as a guest at Weatherwood Nursing & Rehabilitation Ctr in Weatherly, Pennsylvania.  The widow of Charles W. Funk who died on June 6, 2002 she is survived by; daughter, Karen Solderits wife of Frank of Albrightsville; sons, Wayne C. Funk and his wife Maria Jacketti of Hazleton, Charles W. Funk and his wife Joann of Macungie; grandchildren, Laurel, Joseph, and Tina; great grandchildren, Pierson, and Bree.  A graduate of Pottstown High School, Valeria retired from Tung-sol of Weatherly, and had worked in the textile industry. She and her husband owned the former Charlie's Market on Hudsondale Street in Weatherly.   Valeria was a past president of the Weatherly Senior Citizens. The daughter of a minister, Valeria was a sunday school teacher, certified lay minister, and sustained a gospel music ministry accompanied by her late husband.  Born Monday, February 28, 1921 in Harrisburg, Pennsylvania, the daughter of the late Rev. Joseph Wetty, and Daly (Morris) Wetty. She was also predeceased by sister, Rhoda Purnell; brother Joseph Wetty.  Funeral arrangement's have been entrusted to the Philiip J. Jeffries Funeral Home & Cremation Services of 211 First Street Weatherly, Pennsylvania 18255. (570) 427-4231  A Funeral service will be conducted from the funeral home on Friday December 8, 2017 at 11 o'clock AM, Pastor Bill Bearin of St. Paul's Lutheran Church, Albrightsville to officiate. Friends may call on the morning of services from 9:30 A.M. until time of services.  Interment will be in Union Cemetery, Weatherly, Pennsylvania.  Memorials in her name to:American Cancer Society712 South Keyser Ave.Taylor, Pennsylvania 18517orThe Salvation Army  Online condolences may be made to the family at www.griffithsfuneralhomes.com

The family of Valeria E. Funk created this Life Tributes page to make it easy to share your memories.

Send flowers to the Funk family.