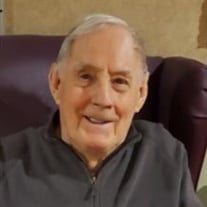 Thomas S. Douglas, Sr., beloved father and grandfather, passed away peacefully on Friday, April 23, 2021 at Heritage Hill in Weatherly, Pennsylvania. Tom spent the majority of his 92 years in his beloved town of Weatherly, where he was born, spent his childhood, and went on to raise his own family. The son of the late Rosalie Winnicki and Michael Douglas, Tom was born on October 27, 1928. Tom was predeceased by his cherished wife Alberta (Forke) “Bertie” Douglas on January 19, 2011. He was also predeceased by a number of siblings. Tom is survived by his daughter Carol (Douglas) Kosik; sons Thomas Douglas, Jr. and wife Gigi and Robert J. Douglas and wife Aleydis; grandsons Nicholas and wife Allie, Matthew and wife Alli, and Jonathan; and great grandson Cade Michael Kosik. Many nephews and nieces also survive Tom. Tom worked as an electrician for many years and took great pride in serving the community with his skills. He also served honorably in the United States Coast Guard and the United States Navy and was a member of Our Lady of Lourdes R.C.C. of Weatherly and the Knights of Columbus. Most importantly, Tom was deeply devoted to his family. He enjoyed spending time with loved ones in his home, sharing his passions for building and collecting, and telling stories. A lifelong animal lover, Tom appreciated spending time with his “great grand dogs” Dalton and Irving in recent years. Arrangements have been entrusted to the Philip J. Jeffries Funeral Home & Cremation Services at 211 First Street in Weatherly. A Mass of Christian burial celebrating Tom’s life will be held on June 4 at 11 o’clock from Our Lady of Lourdes R.C.C, followed by internment with Military Honors in the St. Nicholas R.C.C. Cemetery. Prior to the Mass, please join Tom's family at 10 o'clock for calling hour at Our Lady of Lourdes. Online condolences may be extended by visiting www.griffithsfuneralhomes.com

Thomas S. Douglas, Sr., beloved father and grandfather, passed away peacefully on Friday, April 23, 2021 at Heritage Hill in Weatherly, Pennsylvania. Tom spent the majority of his 92 years in his beloved town of Weatherly, where he was born,... View Obituary & Service Information

The family of Thomas S. Douglas Sr. created this Life Tributes page to make it easy to share your memories.

Send flowers to the Douglas family.