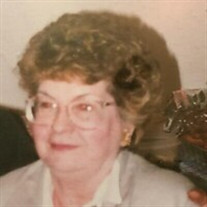 Theresa C. Kudlick, beloved wife, mother, 90 years of age, of Quakake Road, Weatherly, Pennsylvania passed away on Saturday, August 8, 2020, at home.Born Friday, January 31, 1930 in Weatherly, Pennsylvania. the daughter of the late George and Blanche (Fox) Bretsky.  She was also predeceased by; sisters, Elizabeth Eroh, and Catherine Younker.Surviving are; her beloved husband of 62 years, George Kudlick; son who she adored,  Dana G. Kudlick and his wife Marcy of Weatherly;  brothers, Ted Bretsky and his companion Ann Brown of Weatherly, Frederick Bretsky and his wife Marie of Weatherly.A graduate of Weatherly High School, Theresa had worked as a monitor in the Flasher Division of Tung-Sol.  She was an active member of Our Lady of Lourdes R.C.C. of Weatherly having taught catechism. Theresa was a member of Chapter 13 AFSCME Subchapter 8701.  She enjoyed gardening and doing puzzles.  Theresa worshiped the companionship of her Golden Retriever Misty, and missed deeply her deceased dogs; Ginger, Cassie and Sadie.Funeral Arrangements have been entrusted to the Philip J. Jeffries Funeral Home & Cremation Services of 211 First Street Weatherly, Pennsylvania 18255. (570) 427-4231A Mass of Christian Burial will be Celebrated on Monday August 17, 2020 at 11 o'clock A.M. from Our Lady of Lourdes R.C.C. 318 Plane Street Weatherly, Pennsylvania 18255.Private interment Union Cemetery Weatherly, Pennsylvania.Memorials in her name to Carbon County Animal Shelter 77 West 13th Street Jim Thorpe, Pennsylvania 18229Online condolences may be made to the family at www.griffithsfuneralhomes.com

The family of Theresa C. Kudlick created this Life Tributes page to make it easy to share your memories.

Send flowers to the Kudlick family.