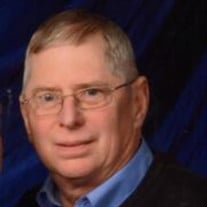 Robert F. Stegmeier, Jr.,of Dairy Road West Penn Township, Tamaqua, Pennsylvania passed away peacefully on Monday, January 4, 2021, at home while in the loving care of his wife of 52 years, Barbara E. (Zeigler) Stegmeier, at 72 years of age. Born Saturday,February 14, 1948 in Hazleton, Pennsylvania. the son of the late Robert F.Stegmeier, Sr., and Ruth (Hochstatter) Stegmeier. Bob is also survived by; sister, Sandra S. Barnes of York, PA.; many nieces and nephews;cousin, William Varano and his wife Grace. A 1966 graduate of Tamaqua Area High School, Bob earned an Associate's Degree at Penn State Berks Campus.In his youth Bob helped his father on their family farm; however, after the passing of his father, Bob and Barbara took the reins of their families Trucking Business, Panther Valley Carriers which they currently own and operate in conjunction with P.V.C. Sales & Service for over 40 years. At its height they were the premiere shipping provider for Strohs and Yuengling Breweries. Bob was affiliated Evangelical Free Church of Lehighton. A former West Penn Twp.Supervisor, Bob enjoyed camping, and snowmobiling. Bob was a true gentleman who will be missed by many. Pending arrangements entrusted to the Robert S. Nester Funeral Home & Cremation Services, Inc. of 2066 West Penn Pike New Ringgold, Pennsylvania 17960. (570) 386-5884. Interment will be in Odd Fellows Cemetery of Tamaqua, Pennsylvania. Memorials in his honor to:Christ Evangelical Free Church 2420 Blakeslee Blvd.Lehighton, Pennsylvania 18235 Online condolences or a fond memory of Bob may made by visiting www.griffithsfuneralhomes.com

The family of Robert F. Stegmeier created this Life Tributes page to make it easy to share your memories.

Send flowers to the Stegmeier family.