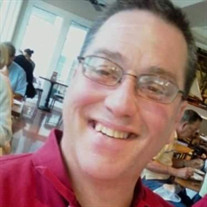 Robert G. Schuetrumpf, 68 years of age, of Moon Hill Drive, Schuylkill Haven, Pennsylvania passed away at home on Sunday, January 9, 2022, while in the loving care of his family. Born Sunday, September 6, 1953 in Coaldale, Pennsylvania; the son of the late Claude W., and Helen M. (Allison) Schuetrumpf. Surviving are; his wife of 40 years, Linda J. (Matukewicz) Schuetrumpf; daughter, Amanda J. Schuetrumpf; brothers, Stephen C. Schuetrumpf and his wife Marilyn of Brighton, TN; James W. Schuetrumpf and his partner Susan McCann of Quakake; Carl D. Schuetrumpf and his wife Mary Ellen of Lancaster; sisters, Susan A. Schuetrumpf of Duluth, GA and Sandra A. Petruso and her companion Brian O'Donnell of Maineville, OH. Many nieces and nephews also survive Bob. A 1971 graduate of Tamaqua Area High School, Bob matriculated to Penn State University earning his degree in elementary education. While at Penn State Schuylkill Campus, Bob sang in the chorus, and after transferring to Main Campus, he sang with the Penn State University Choir. Throughout his career, Bob worked for the local, state, and federal government, respectively. At the time of his retirement, he had spent many years with the State of Pennsylvania at the Department of Public Welfare and Social Security Office. Bob was a devoted member of St. Mark's United Church of Christ in Cressona and actively participated in its community events. He served on the consistory and worship committees, and sang bass in the church choir, performing throughout the year. Most memorably for many, he led and directed the youth choir of the church, which on special occasions performed before the entire congregation and often "stole the show." Even from his daughter's elementary days, Bob embraced the opportunity to be a soccer dad. By the time that Amanda had reached high school, he had happily become the parent of an athlete; rarely missing a swim meet, volleyball match, cross country invitational or weeknight practice under the lights. Bob was best known for his passion for music and it remained throughout his life. In his earlier days, he sang in a number of regional choirs and choruses. He sang with the Schuylkill County Community Choir, was a member of the Coal Cracker Barber Shoppers of Mahanoy City, and the North Penn Barber Shoppers of Lansdale. Following retirement, Bob pursued his dream of staying home, and spending his time between his family, the soccer channel, and his John Deere; as well as learning the joys of Amazon Prime shipping. Funeral arrangements entrusted to the E. Franklin Griffiths Funeral Home & Cremation Services Inc of 655 East Broad Street Tamaqua, Pennsylvania 1825. (570) 668-2550. Online condolences may be made to the family at www.griffithsfuneralhomes.com A Celebration of Bob's Life will be held on Saturday, January 22 at 11am at St. Mark's United Church in Cressona 30 Pottsville street Cresona, Pennsylvania 17929. In light of current events, please wear a mask. (Additional masks will be available on-site.) Memorials in his name to St. Mark's United Church of Christ

Robert G. Schuetrumpf, 68 years of age, of Moon Hill Drive, Schuylkill Haven, Pennsylvania passed away at home on Sunday, January 9, 2022, while in the loving care of his family. Born Sunday, September 6, 1953 in Coaldale, Pennsylvania; the... View Obituary & Service Information

The family of Robert G. Schuetrumpf created this Life Tributes page to make it easy to share your memories.

Send flowers to the Schuetrumpf family.