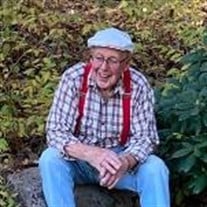 Richard C. Ockenhouse achieved in life what many strive for: complete contentment with the life he lived. He passed away peacefully on Wednesday, January 5, 2022, at home while in the care of his loving family. He never achieved great wealth, social status or fame. He was dyslexic and didn’t master reading until his 30’s. What he did achieve was a life worth emulating; an ordinary hero who had incredible integrity, work ethic, and love for the Lord. Richard believed the three words that best summed up his life were “He tried hard." Born in Lehighton, PA to Raymond and Bessie (Leickel) Ockenhouse on May 28, 1929, Richard was born at home on Carbon street, grew up on 3rd street and moved to first street when he was a teenager. His three brothers; Maynard, Harold and Russell; and sister Pearl Small, have since passed away. He is survived by his sister Jean Fisher of Lehighton. Richard and Jean shared daily phone calls, frequent visits, and competed in the Carbon County Senior Olympics together as their sibling banter continued into their 90's. From his very first job at Sue’s corner store on 3rd street at 10 years old, to working summers picking broad-leaf tobacco in Northampton, Mass., constructing the Beltzville Dam, Blue Ridge Casting and Evelyn Christman’s factory in Packerton (to name a few of the many jobs he had), Richard often worked two or three jobs to provide for his family. An Army veteran, he served during the Korean War. He proudly retired as a bus driver from the CLIU 21. His work ethic was, and is, a shining example for us all. Richard married Mary Louise (Hendrickson), the absolute love of his life, on Nov. 26, 1964. United in love for each other and the Lord, they dedicated their lives to loving and caring for children that needed a home. Together, they raised 18 children on Flag Staff Mountain and provided a home for countless others when the need arose. Mary proceeded Richard in death on February 15, 2008. His faith they would one day be reunited was a comfort to him while he finished his time here on earth without her. Richard loved to encourage others ('Therefore encourage one another and build one another up, just as you are doing.’ 1 Thessalonians 5:11). Somehow he understood the importance of making others feel valued, heard and loved. In his memory, let us find and encourage within ourselves, within our society, within others those gifts that make each of us extraordinary…not fame, not wealth nor society’s definition of success…but the unbelievable beauty of the human heart and the true power of love for each other. In honor of the two things Richard loved to share, the gospel and his home on the mountain, a celebration is planned for May 29, 2022, on Flag Staff Mountain. A church service, followed by a picnic will begin at 12:00 p.m. All who knew him are cordially invited to join us in honoring his life and the Lord. “Well done, my good and faithful servant.” Book of Matthew, Chapter Twenty-Five, Verse Twenty-Three Arrangements entrusted to the E. Franklin Griffiths Funeral Home & Cremation Services, Inc 655 East Broad Street Tamaqua, Pennsylvania 18252. (570) 668-2550 Condolences or a fond memory can be expressed by visiting www,griffithsfuneralhomes.com

Richard C. Ockenhouse achieved in life what many strive for: complete contentment with the life he lived. He passed away peacefully on Wednesday, January 5, 2022, at home while in the care of his loving family. He never achieved great wealth,... View Obituary & Service Information

The family of Richard C. Ockenhouse created this Life Tributes page to make it easy to share your memories.

Richard C. Ockenhouse achieved in life what many strive for:...