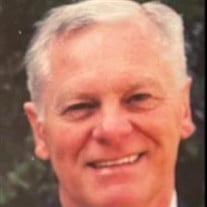 Paul C. West, 91, of Weatherly, passed away at home on January 9, 2022. He was born in Hazleton on May 30, 1930, and was the son of the late Emerson C. and Grace Gangwer West. He was a graduate of Weatherly High School, class of 1948, and was one of the outstanding basketball players in the history of the school. He was selected as a first team guard on the All-Mountain and All-Regional teams and was the first area athlete to be selected on the 1948 Class B All-State first team. After graduating from Weatherly High School he attended The Hill School. In 1950, he was elected captain of The Hill School basketball team and set a new scoring record while leading his team to one of the schools outstanding seasons. In 1990, Paul was inducted into the Weatherly Area High School Basketball Hall of Fame. In 1991, he was inducted into the Carbon County Area Chapter of the Pennsylvania Sports Hall of Fame. In 2006, he was inducted into the Hazleton Area Sports Hall of Fame. In 2014, he received the Charles F. Murray Memorial Award in recognition of his outstanding spirit and dedication to the Weatherly Area School District Athletic Programs. Paul was awarded a Senatorial Scholarship to the Wharton School of Finance and Commerce at the University of Pennsylvania, graduating with honors in 1954. After graduation, he entered the Armed Services and served as a Supply Records Specialist with the Headquarters United States Army Pacific at Fort Shafter, Hawaii. He was employed by the DuPont Company in Wilmington, Delaware as a supervisor in the Marketing Communications Department. Following retirement, he and his wife Marlene returned to Weatherly where he actively pursued his hobbies of hunting and fishing. He was a member of the Silver Ridge Hunting Club and the Penn Haven Gun Club. He was also a member of the Weatherly Area High School Alumni Association. Surviving are his wife, Marlene Van Horn West, a son, Paul C. West, Jr., of Delaware, a daughter, Gretchen West, of North Carolina, three grandchildren, Zachary, Allison and Justin, and a godchild, Kloe Coll. Interment will be in Union Cemetery, Weatherly, at the convenience of the family.

The family of Paul C. West created this Life Tributes page to make it easy to share your memories.

Send flowers to the West family.