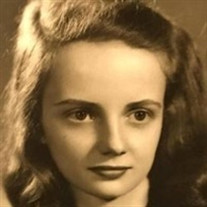 Nellie Margaret Wenzel passed away peacefully on Saturday, October 28 in St. Luke’s Rehabilitation and Nursing Center in Coaldale where she had been a resident for the past two years and a half years.  Nellie was born at home on Dutch Hill in Tamaqua in 1929, the daughter of Franas and Anele (Abromaitis) Virbickas, immigrants from Simnas, Lithuania. Her father passed away when she was two years old. Lithuanian was spoken at home and Nellie only learned English when she attended kindergarten at St. Peter and Paul’s elementary school. In 1998, Nellie visited Lithuania for the first and only time, returning to the farmstead where her mother was born and raised, and visiting the church in which her mother was baptized and married.  Nellie was preceded in death by her parents, her husband George Wenzel, Jr (2012), brother Albert J. Petcavage (2001), sister Helen (Petcavage) Corrigan (2008), son Lee Frank Wenzel (2010), and son-in-law Glenn Shoff (2012).    Nellie was a 1946 graduate of Tamaqua High School.  After graduation she was employed by the Tamaqua Evening Courier. She met her future husband George at Lakeside in Barnesville and the couple was married in 1949.  After raising her three children: George III, Mary Karen, and Lee, she resumed her newspaper career at the Times-News office in Lehighton.  Nellie was an avid card player. As a young mother, she hosted a pinochle club consisting of friends and relatives. On “card club” nights, the children of the household were treated to some of the “goodies” before being tucked into bed so the grownups could socialize. Later Nellie became an accomplished bridge player and accumulated masterpoints as a member of the American Contract Bridge League.  Over the years she participated in numerous public and private bridge and pinochle clubs in Tamaqua, Lansford, Pottsville, and Allentown. Most recently she was a regular pinochle player at Tamaqua Senior Citizens gatherings.  Nellie also enjoyed reading and solving crossword and bridge puzzles. She loved theater and was a patron of the Ritz Company Playhouse in Hawley and the Schuylkill County Council for the Arts in Pottsville.  Nellie is survived by her son George III of Quakake: daughter Mary Karen (Wenzel) Shoff of Tamaqua; grandchildren Lindsay (Shoff) Chiavaroli and husband David Chiavaroli; Damian Shoff and wife Julia (Peters) Shoff; great-granddaughters Blayke Kranch and Sophia Chiavaroli; great-grandson Abraham Shoff; sisters-in-law Janis (Jones) Wenzel and Carol (Karnes) Wenzel; nieces Suzanne (Krepak) Krell, Helen (Corrigan) Hoffman, Mary Elizabeth (Corrigan) Young, Ann (Wenzel) Jones, Janis (Wenzel) Reimiller, Betsy (Wenzel) DeAngelo, Christine (Wenzel) Lesisko, Sharon (Wenzel) VanBuskirk; and nephews Richard Krepak, Thomas Corrigan, John Patrick Corrigan, William Wenzel Jr., and Frank Wenzel.  Nellie was a member of St. Peter and Paul’s Roman Catholic Church in Tamaqua.  In grateful appreciation of the love, care, and spiritual support extended to Nellie during her last years, the family requests that donations be sent to the Community Fund, St. Luke’s Rehabilitation and Nursing Center, care of Cathy Watkins. Funeral arrangements have been entrusted to the E. Franklin Griffiths Funeral Home & Cremation Services Inc. of 655 East Broad Street Tamaqua, Pennsylvania 18252. A Prayer Service will be held on Wednesday evening at 5 o'clock P.M. from the Funeral Home.  Friends shall be received from the conclusion of the service until 7:00 P.M. Private interment SS. Peter & Paul R.C.C. Cemetery, Owl Creek, Pennsylvania. online registry and condolences may be signed at www.griffithsfuneralhomes.com

Nellie Margaret Wenzel passed away peacefully on Saturday, October 28 in St. Luke&#8217;s Rehabilitation and Nursing Center in Coaldale where she had been a resident for the past two years and a half years.  Nellie was born at home on Dutch... View Obituary & Service Information

The family of Nellie M. Wenzel created this Life Tributes page to make it easy to share your memories.

Send flowers to the Wenzel family.