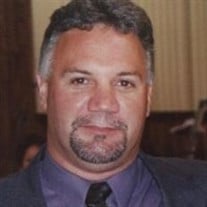 Michael E. Phillips of Arlington Street Tamaqua, Pennsylvania passed away peacefully on Thursday November 16, 2017 at St. Luke's Miners Memorial Medical Center after a thirty year battle against cancer, at the age of 55.  Born in Lewistown, Pennsylvania the son of Merrel L., and E. Louise (House) Phillips of Marysville , he is also survived by his beloved wife of thirty years, Barbara J. (Supko) Phillips; daughter, E. Gretchen Steigerwalt wife of Gregg of Tamaqua; son, Staff Sgt. Nathan D. Phillips U.S. Air Force, actively serving in Iraq; brother, Daryl M. Phillips and his wife Deborah of Marysville; grandsons, Pacey, Randolph, and Michael Steigerwalt; nephew, Shane and his wife Jessica; great niece, Kaitlyn.  A 1979 graduate of Susquenita High School, Mike was a standout four sport athlete. He served honorably in the United States Army, and worked for PP&L for 18 years. After leaving PP&L, Mike went back to college earning his BS in education from Bloomsburg University in 2010 with an emphasis in Science and Biology. Mike worked at Cabela's in Hamburg for a number of years, and last worked at Lowe's in Pottsville.  Never one to sit idle, Mike enjoyed the outdoors hiking, and mountain biking. Mike also loved to cook, and Barb admits he handled that task for the past 27 years. Civically he was an active member of the neighborhood playground association, and he reveled in coaching Little League baseball. He always had time to help a friend or neighbor.  Mike was an imposing man at first site; however, his demeanor was just the opposite. Few could find a man so humble, and good natured, but just like himself his love for animals tilted to that of strength for he and Barb had two German Shepherds, Bear and Zeke who where constant companions to Mike. Arrangements have been entrusted to the E. Franklin Griffiths Funeral Home & Cremation Services, Inc. of 655 East Broad Street Tamaqua, Pennsylvania 18252. (570) 668-2550  A Remembrance Services will be held on Saturday November 25, 2017 at noon from the funeral home. Friends may call from 10:00 A.M. until time of services. Military honors will be bestowed.  Memorials in his name to: Tamaqua Little League in care of the funeral home  online registry and condolences maybe signed at www.griffithsfuneralhomes.com

The family of Michael E. Phillips created this Life Tributes page to make it easy to share your memories.

Send flowers to the Phillips family.