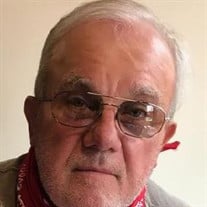 Michael J. Bubel, Jr., beloved husband, father, uncle, cousin, and grandfather, 71 years of age, of Hometown Ave., Tamaqua, Pennsylvania passed away on Monday, November 22, 2021, at St. Luke's Warren Campus in Phillipsburg, New Jersey. Born Friday, September 1, 1950 in Harrisburg, the son of the late Michael J. Bubel, Sr., and Helen J. (Valinsky) Bubel. Raised in the town of Brockton, prior to building a life and a family in Hometown. Surviving are: his wife of 47 years, Julianne M. (Pellock) Bubel; sons, Kristopher M. Bubel and his wife Samantha of Tamaqua, Matthew M. Bubel of Tresckow; brother, Francis Bubel and his wife Linda of Huntington Valley; sister, Michele Destra and her husband Anthony of Vineland, NJ; grandsons, Mason Yachera and Elliott Bubel, who affectionately called him Pappy; several nieces, nephews, and cousins: especially, Helene Calabrese, who was like a sister to him, as well as his treasured goddaughter Janet Zemantauski. A graduate of Marian Catholic High School, Class of 1968, Michael earned his Associates Degree from Penn State Schuylkill and was a certified Electrician. For 25 years, Michael worked as a Deep Mine Safety Electrical Inspector for D.E.P. He was also a member of the Knights of Columbus. A self-proclaimed "Motorhead”, Michael’s favorite pastime was working on cars from the late 1960's and early 1970's. He was currently restoring a 1965 Chevelle. Michael was an amazing, all-around dad. There was never an event in his sons’ lives that was missed. Whether it was coaching Kris in his athletic activities or supporting Matt in his artistic pursuits. He cherished the time he spent with his grandsons. He was Elliott’s number one bud, and an inspiring role model for Mason. He was the definition of a family man, always there for everyone. Whatever the problem, big or small, electrical or mechanical, he was ready with his tool bucket in hand. A truly selfless human being. Funeral Services entrusted to the E. Franklin Griffiths Funeral Home & Cremation Services, Inc. of 655 East Broad St., Tamaqua, Pennsylvania 18252. A Mass of Christian Burial will be celebrated on Sat December 11, 2021 at noon from St. John XXIII R.C.C. 307 Pine Street Tamaqua, Pennsylvania 18252 Friends may call on Friday evening December 10, 2021 at the funeral home from 6 to 8:00 P.M. online condolences can be expressed by visiting www.griffithsfuneralhomes.com

The family of Michael J. Bubel Jr. created this Life Tributes page to make it easy to share your memories.

Send flowers to the Bubel family.