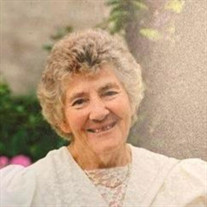 Margaret “Peggy” (Crawford) Tease - Beer, was born to James Henry and Sarah (Smith) Crawford in Lismonaghan, Kingsley, County Fermanagh, Ireland on November 20, 1929. Born a twin to her brother, whom she sadly lost in early childhood, Peggy was one of 12 Crawford siblings. A devout Christian, she was well known to support her church and faith in any way she could throughout her life. After attending Stragnowa School she worked for a well known company “Wellworths”, becoming the manager in their Monaghan store. It was during this stage in her life that Peggy met W. John Tease, also a manager in a hardware store in the same town, and decided to leave Ireland for America with him. Peggy was later wed to John in Philadelphia, PA. Many recall that John was the love of her life well beyond his passing in 1978. Peggy and John were parents to loving sons and brothers, Austin Desmond Tease and the late Paul Crawford Tease, raising them in the Glenside, PA area. Peggy loved the beach and sun, having spent much of her life in sunny Florida since the early 1980s - a natural escape from being permanently “cold”. She loved playing tennis, always competitive, and her loved ones remember her in constant pursuit of a worthy opponent. Another passion of hers was found in yard sales, and in pursuit of long lost treasure, Peggy was known to go as far as stopping traffic regardless of what was going on in life. Many also remember that Peggy knew the enjoyment found in fine tea and desserts after every meal, and successfully passed this passion on to her granddaughters. In exchange for this experience, her granddaughters taught Peggy how to swim. Peggy is survived by her sisters Daisy (Alice), Phyllis, Vera, Ruth and Joan, her eldest son Austin, and her three granddaughters Sara, Laura and Morgan. Peggy was also predeceased by her second husband, Martin Beer. Private arrangements entrusted to the Philip J. Jeffries Funeral Home & Cremation Services of 211 First Street Weatherly, Pennsylvania 18255. (570) 427-4231 Online condolences may be signed by visiting www.griffithsfuneralhomes.com

The family of Margaret E. Tease - Beer created this Life Tributes page to make it easy to share your memories.