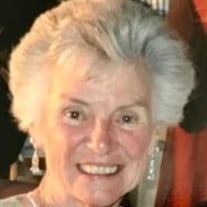 Margaret Julianna Miller, age 90, of Weatherly, PA, devoted wife, loving mother, adored grandmother and great grandmother, treasured sister and aunt, died Saturday August 14, 2021. Moving from Scotch Plains, NJ after 18 years, Margaret became known as the flower lady of Weatherly, where she greeted customers at her son and daughter-in-law's greenhouse in Weatherly. She also loved entertaining and cooking for her family and friends. She was a member of the First Presbyterian Church of Weatherly. She enjoyed music and loved singing in the choir. She was choir director for many different churches during her moves through the years. Margaret was born December 14, 1930 in Gardner, North Dakota. She was the daughter of the late Lynn Brown and the late Elvera (Bjarnason) Brown. She was the third of nine children. She graduated from high school in Milton, North Dakota. She married Donald in 1948 and they celebrated 65 years together before his passing April 22, 2014. She is survived by her two daughters, Connie Maritch, wife of the late Toby of Racine, WI, Peggie Palentchar wife of Glenn of Colonia, NJ; three sons, Dr. Lynn K. Miller and his wife Kathryn of Bloomfield Hills, MI; Donald D. Miller and his wife, Barbara of Hailey, ID and Paul R. Miller and his wife, Lorraine of Weatherly, PA; thirteen grandchildren; and twenty-six great grandchildren; and hosts of family and very good friends. Margaret was preceded in death by her loving husband Donald, her granddaughter Allyson Miller, her son-in-law Toby Maritch and her grandson Scott Flack. Arrangements are being handled by Philip J. Jeffries Funeral Home & Cremation Services 211 First street Weatherly, Pennsylvania 18255. (570) 427-4231 She will be laid to rest beside her devoted husband in Milton Cemetery, North Dakota. Memorials in her name to: First Presbyterian Church of Weathery East Main & spring Street Weatherly, Pennsylvania 18255 or Wounded Warrior Project P.O. Box 75857 Topeka, Kansas 66675 To share a fond memory of Margaret or offer online condolences to the family, please visit www.griffithsfuneralhomes.com

The family of Margaret Julianna Miller created this Life Tributes page to make it easy to share your memories.

Send flowers to the Miller family.