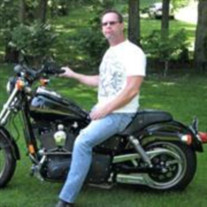 Louis P. Baddick, 62 of Mechanicsburg, Pennsylvania passed away on Saturday, September 25, 2021, at home, having fought a valiant battle against renal cancer while in the tender care of his beloved wife Tara L. (Titus) Baddick. Born Sunday, May 17, 1959 in Pottsville, Pennsylvania the son of the late Louis P. "Speck" , and Rose (Smarr) Baddick. Lou was also predeceased by; his brother, James Joseph Baddick on July 18, 1984. To those who knew Louie well he often would purport how talented a carpenter his brother Jim was, and state that if he had lived they would have been in business together. Lou missed Jim deeply. Surviving are daughter, Justine Titus, whom he called his favorite daughter, her husband Benjamin Martinez known as "Ben Man", brothers, Robert "Bert" Baddick and his wife Susett of Coaldale, Richard "Rick" Baddick of Brockton; sisters, Donna Malaska & her husband Peter of Nesquehoning, Roseann Facini and her husband Albert of Florida, Lisa Knoblach and her husband Terry of Tamaqua, Nancy Sunday and her husband Dean of Tamaqua, Cynthia Zukus and her husband Lenny of Tuscarora; mother-in-law Joyce Titus of Tamaqua who was instrumental in caring for Lou; sister-in-law, Debra Baddick of Tamaqua. Many nieces and nephews also survive Louie. A 1977 graduate of Tamaqua Area High School, Louie served honorably in the United States Army for 4 years with deployments to Germany as a member of the operating Engineers 62 Echo Company. Returning home, Lou worked for L, C&N, and for Bethlehem Mines for over 22 years. Lou retired from Nestle in Fogelsville. Catholic by faith, Lou was an avid outdoorsman, he enjoyed fishing at Fishing Creek in Orangeville with the Navitsky family, and bi-yearly trips to Red Horse Lake in Ontario, Canada; deer season at the family cabin quite simply known as "Baddick's Cabin" on the North Ward mountain. Lou had a contagious smile, and a swagger about him, never too loud; however you knew when he was in the room. He lived by these four simple words "While Alive He Lived". Funeral arrangements entrusted to the E. Franklin Griffiths Funeral Home & Cremation Services, Inc. of 655 East Broad Street Tamaqua, Pennsylvania 18252. (570) 668-2550 A Mass of Christian Burial celebrating Louie's life will be held at 10 o'clock A.M. on Saturday October 2, 2021 from St. John XXIII R.C.C., located at 307 Pine Street Tamaqua, Pennsylvania 18252. Interment with Military Honors to be bestowed will be on Tuesday October 5, 2021 at 11:30 A.M., will be in Ft. Indiantown Gap National Cemetery Annville, Pennsylvania. Online condolences or a fond memory of Louie can be expressed by visiting www.griffithsfuneralhomes.com

Louis P. Baddick, 62 of Mechanicsburg, Pennsylvania passed away on Saturday, September 25, 2021, at home, having fought a valiant battle against renal cancer while in the tender care of his beloved wife Tara L. (Titus) Baddick. Born Sunday,... View Obituary & Service Information

The family of Louis P. "Louie" Baddick created this Life Tributes page to make it easy to share your memories.

Send flowers to the Baddick family.