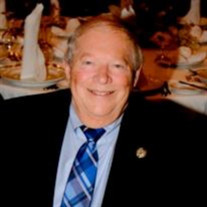 Dr. Kenneth Harold “Ken” Brown, age 75, of Newark, Delaware, was surrounded by his family when he passed away on Saturday, March 12, 2022. Ken was born on August 8, 1946 at Coaldale Hospital near Tamaqua, Pennsylvania to parents the late Kenneth C. Brown and Edna (Mauger) Brown. As a youth in Tamaqua, Ken was a member of the Boy Scouts of America and achieved the rank of Eagle Scout. He was also a member of the Order of the Arrow, which is the honor society of Scouting. Ken graduated from Tamaqua High School in 1964, completed his Bachelor of Science in Secondary Education Mathematics at Bloomsburg State College in 1968, and his Master of Education in Mathematics from the University of Delaware in 1971. He engaged in post-graduate studies in Administration and Curriculum at the University of Delaware, and later went on to earn his Doctorate in Educational Leadership from Nova Southeastern University in 1981. Ken started his career in education teaching eighth grade mathematics at Wilmer E. Shue School in Newark, Delaware where he taught from 1968 until 1988 and was well known as a tough but fair teacher. Beginning in 1983, he was the District Chairperson of Mathematics for Christina School District for six years, and then served for a year as a Special Agent working on curriculum development. In 1989 he accepted the position of Director of Finance for the Christina School District, serving in that role for 10 years. Ken also was an adjunct faculty member at Wilmington University, where he taught Master and Doctoral level courses in Educational Leadership and Administration from 1992 to 1999. Ken retired from Christina School District on September 1, 1999, and accepted the position of Chief Financial Officer of Prince George’s County Public Schools in Maryland, serving in that role until 2003. After leaving Prince George’s County, he worked as an independent educational consultant until finally retiring. Ken had been a long-time member of the Newark Rotary Club and was a Master Mason with over 50 years of service with dual membership in the Tamaqua-Mahanoy City (Pennsylvania) Lodge no. 238 and Solomon Lodge no. 36 of Newark, Delaware. He was also a 32nd degree in Scottish Rite (Northern Masonic Jurisdiction), Valley of Wilmington. He enjoyed spending time at the beach and the mountains. He loved being on the water, whether it was exploring the back bays of Ocean City in his boat, catching a bounty of crabs for dinner, or taking cruises to island destinations on the high seas. Most of all, he loved spending time with his friends and his family who he loved so much. Ken began dating his beloved wife of 53 years, Patty, when he was 15 and she was 14. They married on November 2, 1968, moved to Delaware, and had one daughter. In addition to his parents, Kenneth and Edna, he was preceded in death by his sister, Nancy Jane Brown Kline. Ken is survived by his wife, Patricia Ann Hoffman Brown of Newark; daughter, Patricia Lee Brown Welch (Ticia); son-in-law, Edward Anthony Welch; and grandsons, James Kenneth Welch and Jordan Christopher Welch, all of Ocean Pines, Maryland. Interment in Odd Fellows Cemetery Tamaqua, Pennsylvania. In lieu of flowers, donations may be made in Ken’s memory to the Supreme Council, 33° Ancient Accepted Scottish Rite, NMJ, USA, PO Box 519, Lexington, MA 02420-0519 or by clicking here or to the Salvation Army, P.O. Box 1959, Atlanta, GA 30301, or by clicking here. online condolences can be expressed by visitingwww.griffithsfuneralhomes.com

The family of Dr. Kenneth H. "Ken" Brown created this Life Tributes page to make it easy to share your memories.

Send flowers to the Brown family.