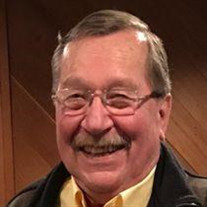 Retired United States Army Major John J. Hager, III, known as "Jack" , 80 years of age, of Rush Township Tamaqua, Pennsylvania passed away peacefully on Saturday, May 1, 2021, at home while in the care of his daughter Robin. Born Wednesday, February 19, 1941 in Palmerton, Pennsylvania the son of the late John J. Hager, Jr., and Matilda (Poprich) Hager. John was also predeceased by his wife Marian (Jones) Hager; sister, Patricia Rose. Surviving in addition to his daughter Robin are son, Michael Hager; parallel family, Jan Prust, Michael McClelland; brother, Michael Hager; grandchildren, Ryan, Kenzie, Holie, Brian, Matthew; 6 great grandchildren; one niece, and a nephew also survive Jack. Jack attended Malvern Prep but did not graduate, instead he enlisted in the US Army in 1958 as an Infantryman. Jack was first stationed in Korea in 1959 for two years. He took a brief break from the service to come back home and work at Kidd's Klothes in Lansford, Pennsylvania. This is where Jack met his first wife Sally Ann (Houtz) Hager. They were married for fifteen years and had their two children, Robin, and Michael. Jack spent the next twenty years dedicated to the service in the US Army. After six more years of enlisted service Jack graduated from Officers Candidate School and was commissioned as a second Lieutenant in Military Intelligence. Jack was stationed in multiple foreign calls which included; Germany, Turkey; and a tour in Vietnam. His awards and decorations of service included; the Army Commendation Medal (Third Oak Leaf Cluster), The Bronze Star, Meritorious Service Medal, as well as certifications from numerous schools and training. Jack was a mainstay at Harpers Ferry Kitchen Store in Yuba City, Calif. for many years, working as assistant to the owner, his good friend Jim Czigans. He was an invaluable resource for Jim, the Store, and the store's customers with his understanding of the selections and use of the myriad of items in the store lineup. When Jim decided to add wines to the stores selection, Jack took the lead and became the wine specialist. He spent many hours researching and developing a knowledge of wine that led to Harpers Ferry becoming the fine wine headquarters in the Yuba-Sutter area. Under Jack's direction the store held monthly wine tastings, often featuring winemakers, management and other representatives from well known California Wineries. After the closing of Harpers Ferry, Jack took his ever expanding wine expertise to Ruthy's Wine Shop, and then hired away by New Earth Market where he developed a fine wine and craft beer selection unmatched in the area. During his years as a wine guru, he was active in wine tasting to raise funds for a variety of charities. He was awarded the President's Award from the Yuba - Sutter United Way for his many years of time and effort in fundraising on their behalf. During his time in Yuba City he served on Local Agency Formation Commission (LAFCO) which was involved in the planning of land use and government services within the Yuba City sphere of influence; and served on the Sutter County Grand Jury. He had no more staunch supporter here than his best friend and late wife Marian. After her passing Jack returned to Pennsylvania to be close to his family. Jack leaves behind a tremendous legacy of kindness, generosity, dedication to his community, and above all a lifetime of service to his country. Funeral arrangements entrusted to the E. Franklin Griffiths Funeral Home & Cremation Services, Inc. of 655 East Broad Street Tamaqua, Pennsylvania 18252. (570) 668-2550 Private interment with Military Honors to be bestowed Ft. Indiantown Gap National Cemetery Annville, Pennsylvania. Online condolences may be made to the family at www.griffithsfuneralhomes.com

The family of John J. Hager III Major retired US Army created this Life Tributes page to make it easy to share your memories.

Send flowers to the Hager family.