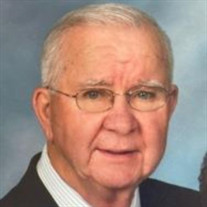 Frederick G. Bretsky, 93 years of age formerly of East 2nd Street Weatherly, Pennsylvania passed away peacefully on Sunday, November 21, 2021, as a guest of Heritage Hill Senior Living Center in Weatherly, Pennsylvania. Born Saturday, March 31, 1928 in McAdoo, Pennsylvania the son of the late George, and Blanche (Fox) Bretsky. He was also predeceased by; his beloved granddaughters, Jennifer, and Betsy Fedorick; sisters, Theresa Kudlick, Katherine Younker, Elizabeth Eroh; son-in-law, Bill Fedorick, his fishing buddy along with his brother Teddy. Surviving are; his loving wife of 69 years, Marie Paula (Arsenault) Bretsky of Weatherly; daughters, Patricia Anne Swanson wife of Robert of Danville, Annette Fedorick and her fiance Earl Stafford of Weatherly; brother, Teddy Bretsky and his wife Anne of Weatherly; many nieces and nephews. Fred was a Weatherly High School graduate, and standout baseball player. After graduation he was accepted into Rutgers University to study Journalism; however, his father felt he would be best served by working for the Lehigh Valley Railroad which he did from 1948 to 1990, after having served honorably in the United States Navy for 2 years. An avid outdoorsman, Fred enjoyed hunting, fishing, gardening, and following the Red Sox's and Notre Dame Football. Fred was a member of Our Lady of Lourdes R.C.Church,the Silver Ridge Hunting Club of Weatherly, and Weatherly American Legion. Fred was an avid reader. Funeral arrangements entrusted to the Philip J. Jeffries Funeral Home & Cremation Services of 211 First street Weatherly, Pennsylvania 18255. (570) 427-4231 A Mass of Christian Burial will be celebrated at 11 o'clock A.M. on Saturday November 27, 2021 from Our Lady of Lourdes R.C.C. located at 318 Plane Street Weatherly, Pennsylvania 18255. The family will receive friends from 10:00 AM to 11:00 AM in church. Rev. Msgr. William Baker to officiate. Interment with Military Honors to be bestowed will be in Union Cemetery, Weatherly, Pennsylvania. Memorials in his name to: Our Lady of Lourdes R.C.C. or Weatherly Area community Library Brenkman Drive Weatherly, Pennsylvania 18255 FAMILY IS REQUESTING MASKS TO BE WORN Online condolences may be made to the family at www.griffithsfuneralhomes.com

The family of Frederick G. Bretsky created this Life Tributes page to make it easy to share your memories.

Send flowers to the Bretsky family.