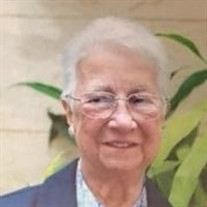 Dorothy Lazo, 83 of Weatherly, Pennsylvania passed away on Wednesday, December 27, 2017, at the Lutheran Home of Topton.  Widow of Nicholas Lazo, Sr., she is survived by; daughter, Kathleen Lazo Talaat of Fitchburg, WI; sons, Nicholas Lazo and his wife Natale of Kutztown, Thomas Lazo of Wardensville, WV,; brothers, Steven Gutosky and his wife Beverly of Weatherly, Joseph Gutosky of Weatherly; grand children, Emily Witzel, RyanLazo, Matthew Lazo, Andrew Lazo.  A Weatherly High School graduate, Dorothy was a certified L.P.N. having done private duty nursing. She also had worked at Tung-Sol in Weatherly, and Carbon County Home.  A Military wife, she and her family accompanied Nick to both domestic and foriegn assignments. She was a member of Our Lady of Lourdes R.C.C. of Weatherly having sung in the church choir. Dorothy, enjoyed gardening, listening to music, was an avid reader, and played the piano and violin.  Born Sunday, December 31, 1933 in Weatherly, Pennsylvania, she was the daughter of the late Joseph, and Dorothy (Stritz) Gutosky. She was also predeceased by a brother John A. Gutosky.  Funeral arrangements have been entrusted to the Philiip J. Jeffries Funeral Home & Cremation Services of 211 First Street Weatherly, Pennsylvania 18255. (570) 427-4231 Funeral Services will be held on Tuesday January 2, 2018 at 11 o'clock A.M. from the funeral home.  Friends may call on the morning of services from 10:00 A.M. until time of services.  Memorials in her name to: American Heart Association 610 Community Way Lancaster, Pennsylvania 17603  Interment will be at Ft. Indiantown Gap National Cemetery, Annville, Pennsylvania.  Online condolences may be made to the family at www.griffithsfuneralhomes.com

The family of Dorothy Lazo created this Life Tributes page to make it easy to share your memories.

Dorothy Lazo, 83 of Weatherly, Pennsylvania passed away on Wednesday,...

Send flowers to the Lazo family.