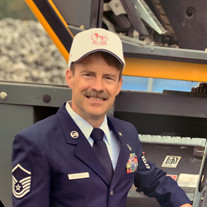 Chris J. Blackwell, beloved husband, father, son, brother, patriot, of Brenkman Drive Weatherly, Pennsylvania passed away on Saturday, December 26, 2020, at home while in the loving care of his wife Tracy (Coll) Blackwell at 53 years of age. Chris succumbed to cancer contracted during his deployments abroad serving in the Air National Guard fighting in America's Operation Enduring Freedom Campaign. Born Friday, June 9, 1967 in Vero Beach, Florida. Chris is also survived by; his father, John Blackwell; daughters, Carrie Ann Blackwell, Gabriella Hernandez, Abigail Hernandez, Alianna Hernadez; sister, Darlene Childers wife of Danny; brother, Michael Blackwell. Chris is also survived by his loving cousins, the Malski family, friends and co-workers. A graduate of Freeland MMI, Chris entered the Air Force Air National Guard and joined the 201st RED HORSE Civil Engineering Squadron located at Ft. Indiantown Gap, PA in July 1985 . RED HORSE stands for Rapid Engineering Deployable Heavy Operational Repair Squadron. He completed Basic Training at Lackland Air Force Base, Texas as a Heavy Equipment Mechanic at Chanute Air Force Base, Illinois. He was a Heavy Equipment Mechanic until 1995 when he crossed trained and completed training at Sheppard Air Force Base, Texas as a Heavy Equipment Operator . Chris has worked as a Mechanic, Concrete Mixer driver as well as a Heavy Equipment Operator in his civilian career. In 2010 he was hired full time as a Federal Technician at the Air Force Regional Equipment Operator Training Site (REOTS) located at Ft. Indiantown Gap as a Heavy Equipment instructor. He currently instructs Military Active Duty, National Guard, Reserve and Civilian Military Personnel from around the world on all types of Heavy Construction Equipment to include Cranes and Tractor Trailers. Chris was activated and deployed 3 times in support of the Global War on Terror First deployment was in 2002 to the country of Qatar Second deployment was in 2005 to Iraq Third deployment was 2009-2010 again to Iraq. Some shorter deployments include Germany, Italy, Honduras, Canada and Guam as well as many deployments within the continental United States, including support of the U.S. Border Patrol along the U.S. Mexico border during his 35 years of service in the National Guard. Chris was a proud American. He took great pride in sharing his incredible knowledge and skills with his fellow members of the military all around the world. Chris was never one to sit idle. He enjoyed working around his home, tinkering on his Mopar Race Cars, and did his share of homework duty. As a dad to four girls, Chris taught them all some basic car knowledge, and mechanics. They all knew how to change a tire, and navigate their way through their dad's tool box. Chris enjoyed watching Abigail play basketball, and he looked forward to going to Graziano's restaurant. Private Funeral arrangements have been entrusted to the Philip J. Jeffries Funeral Home & Cremation Services of 211 First Street Weatherly, Pennsylvania 18255. (570) 427-4231 Memorials in his name to: Salem U.C.C. of 330 First Street Weatherly, Pennsylvania 18255, or Weatherly High School where a scholarship fund will be established to benefit graduating Seniors matriculating to trade School. Interment with Military Honors Union Cemetery Weatherly, Pennsylvania. Online condolences may be made to the family at www.griffithsfuneralhomes.com

The family of Chris J. Blackwell created this Life Tributes page to make it easy to share your memories.

Send flowers to the Blackwell family.