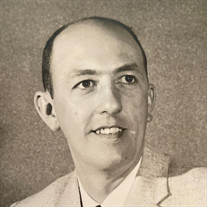 Carl L. Dreisbach, 93 years of age, of Tamaqua, passed away peacefully surrounded by family at his home on Thursday April 14, 2022. Carl was born on August 22, 1928 in Tamaqua, Pennsylvania the son of the late George and Beatrice (Homer) Dreisbach. Carl was also predeceased by; brothers, Donald, William, and Arthur Dreisbach; sister Violet Farrell. Carl attended Tamaqua High School. When he was 14, he worked at the former Eames’ Bakery in Tamaqua. He joined the Navy in 1946 and served for two years aboard the U.S.S. Birmingham. After returning to Tamaqua, he married Nancy (Hoffman) Dreisbach and they celebrated 60 years of marriage before he passed. He worked for 42 years at the Atlas Power Company on both the powder line and the blast supply. Carl was a co-owner of Nancy’s Sewing Center in Tamaqua with his wife. He was active in his community through organizations such as the American Hose Company, the Elk’s, and the Keystone Club. Carl was instrumental in the shows at the Elk’s, such as the Miss America pageants, which always brought laughter and fun. He was a member at Zion Lutheran Church. Carl was always known to be a jokester and had many hobbies including painting, cheering for Penn State football, and collecting memorabilia from his trips to Germany. He was famous for having surprise birthday parties for himself and enjoying a beer (or two) with good friends. As a young boy, he was even the yo-yo champion of Philadelphia. Carl is survived by his wife, Nancy, his son, Retired Colonel Greg Dreisbach and his wife Ivy of Baltimore, Maryland, his granddaughters, Caitlin (Dreisbach) wife of Tyler Woodward of Rochester, New York, Erin Dreisbach of Baltimore, Maryland; sister Beatrice Holmberg of Tamaqua. Many nieces and nephews also survive Carl. Carl's family would like to thank the St. Luke’s Hospice team including his amazing hospice nurse, Cindy, and phenomenal home hospice aid, Tammy. He was unbelievably loved during the over 10 months he was in their care. Funeral Arrangements entrusted to the E. Franklin Griffiths Funeral Home & Cremation Services, Inc. of 655 East Broad Street Tamaqua, Pennsylvania 18252. (570) 668-2550 A Funeral Service will be held from the funeral home on Wednesday April 27, 2022 at 11 o'clock A.M., Rev. Cindy White to officiate. Friends may call on Tuesday evening April 26, 2022 from 5:00 P.M. to 7:00 P.M., and on the morning of services from 10:00 A.M. until the time of services. Interment Sky-View Memorial Park Tamaqua, Pennsylvania. Military honors will be bestowed. The family requests that donations be sent to St. Luke’s Hospice 2455 Black River Road Bethlehem, Pennsylvania 18015, or Zion Evangelical Lutheran Church 109 North Greenwood Street Tamaqua, Pennsylvania 18252. Online condolences or a fond memory of Carl can be expressed by visiting www.griffithsfuneralhomes.com

Carl L. Dreisbach, 93 years of age, of Tamaqua, passed away peacefully surrounded by family at his home on Thursday April 14, 2022. Carl was born on August 22, 1928 in Tamaqua, Pennsylvania the son of the late George and Beatrice (Homer)... View Obituary & Service Information

The family of Carl L Dreisbach created this Life Tributes page to make it easy to share your memories.

Send flowers to the Dreisbach family.