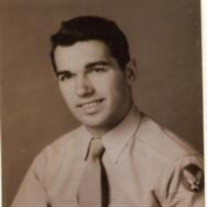 It is with great sadness that we announce the passing of Anthony J. Zahora, Sr., aka. "Tiki Tony" 96 years of age of Walker Twp., South Tamaqua, Pennsylvania who traveled into Heaven on Sunday, February 27, 2022, at St. Luke's Miners Memorial in Coaldale, Pennsylvania. Born Thursday, August 13, 1925 in Coaldale, Pennsylvania the son of the late Joseph, and Julia (Hudec) Zahora. Tony was also predeceased by his; beloved wife, Marie (Kupetz) Zahora; children, Michele D. Knepper, Anthony M. "Tony" Zahora, Jr.; sisters, Julia Zahora, Mary Davison; brothers, Charles "Cutter", Joseph, John, and William Zahora.; grandson, Kyle Knepper. Surviving are son, Charles Zahora and his wife Marilyn of Marysville; daughters, Maria A. Naab wife of Ed of Lebanon, Margo Russoli wife of Tom of Schnecksville; six grandchildren, and four great grandchildren whom he adore; companion, RuthAnn Feane; many nieces, and nephews.. A Coaldale High School graduate, Anthony fought valiantly in the United States Army during WWII. Returning home Anthony worked in the mines for many years, and then worked as a machinist for Bonney Forge in Allentown. Catholic by faith, Anthony enjoyed clamming at the Delaware beaches, long walks, time spent with his family, and trips to Las Vegas, taking in the buffets . Tony, leaves a legacy of love, and humility behind. "Pop" as he was called by his grandchildren, was funny with an uncanny sense of humor. He looked forward to Christmas sending cards with "Believe" written in the heading. His ability to persevere through the many trials of life will live on in stories for many generations, He was always in ones corner, and your biggest fan. No matter the tribulation he faced, his faith in God never wavered. Funeral Arrangements entrusted to the E. Franklin Griffiths Funeral Home & Cremation Services, Inc. of 655 East Broad Street Tamaqua, Pennsylvania 18252. (570) 668-2550 Funeral Service will be held on Saturday March 5, 2022 at 11 o'clock A.M. from the funeral home. Friends may call from 9:30 A.M. until time of services. Interment with Military Honors to be bestowed will be in St. Bertha's Cemetery R.C.C. Cemetery, Walker Twp., Pennsylvania. In memory of Anthony please donate to a local charity which helps those less fortunate. Online condolences may be made to the family at www.griffithsfuneralhomes.com

It is with great sadness that we announce the passing of Anthony J. Zahora, Sr., aka. "Tiki Tony" 96 years of age of Walker Twp., South Tamaqua, Pennsylvania who traveled into Heaven on Sunday, February 27, 2022, at St. Luke's Miners Memorial... View Obituary & Service Information

The family of Anthony J. Zahora created this Life Tributes page to make it easy to share your memories.

It is with great sadness that we announce the passing of Anthony...

Send flowers to the Zahora family.