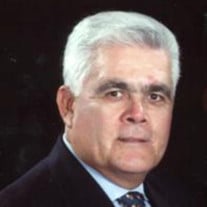 Alfonso "Al" Martinez, 74 years of age, of Andreas, Pennsylvania passed away peacefully on Saturday, January 2, 2022, at home while in the tender care of his family. Al was born March 17, 1947 in Corozal, Puerto Rico, and is a son of the late Alfonso and Demetria (Rivera) Martinez. Al was also predeceased by sisters Irma Alvarez and Carmen Marrero, brothers Jose "Pepito" Martinez, Miguel A. Martinez, and Jose L. "Bibi" Martinez. Surviving are his beloved wife of 46 years, Margaret I. (née Wertman), daughter Sarah K. of Andreas, son James A. of Wanamakers and his fiancée Sonia Soto of Barranquilla, Columbia, brother Juan A. "Tony" Martinez sister Gloria Hoffman, sister-in-law Carmen Martinez, and many nieces and nephews. A 1965 Bethlehem Catholic graduate, Al served honorably in the United States Coast Guard. He was a self-employed insurance broker and financial consultant. A devoted member of Zion's Stone Church of West Penn Township, Al was a former consistory member. Al also served on the Tamaqua 2004 Advisory Committee, served with the Schuylkill County United Way, was involved in the Boy Scouts of America as an adult leader, and merit badge counselor, was a member of the Andreas V.F.W. Post 5069, Schuylkill County Republican Committee, served as a Tamaqua Salvation Army Board member, belonged to the New Ringgold International Order of Odd Fellows, Orwigsburg Masonic Lodge 138 F&AM, and was a Shriner. Al served multiple terms as a West Penn Supervisor, and on the West Penn Zoning Board. He will be remembered for his kind heart, quick wit, and sense of humor. Many times cringe-worthy, frequently side-splitting, Al usually had a smile and a joke for everyone he met. Funeral arrangements entrusted to the Robert S. Nester Funeral Home & Cremation Services, Inc. of 2066 West Penn Pike New Ringgold, Pennsylvania 17960 (570) 386-5884 A Funeral service will be at 11 o'clock AM on Friday January 7, 2022 from the funeral home, Rev. Russell Campbell to officiate. Friends and extended family may call from 9:30 A.M. until the time of services. Interment with Military Honors to be bestowed will be in Zion's Stone Church Cemetery in New Ringgold, Pennsylvania. Memorials in his name to: Alzheimer's Association 225 North Michigan Ave. Floor 17 Chicago, IL 60601 Online condolences or a fond memory can be sent by visiting www.griffithsfuneralhomes.com

Alfonso "Al" Martinez, 74 years of age, of Andreas, Pennsylvania passed away peacefully on Saturday, January 2, 2022, at home while in the tender care of his family. Al was born March 17, 1947 in Corozal, Puerto Rico, and is a son of the late... View Obituary & Service Information

The family of Alfonso "Al" Martinez created this Life Tributes page to make it easy to share your memories.

Send flowers to the Martinez family.